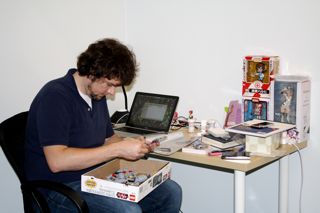 Above, you can see me assembling Lego’s new “midi-size” Millennium Falcon model, which I purchased the day before my root canal as a bit of distracting fun post-procedure. It was an enjoyable, quick build, but I regret not purchasing another, possibly larger piece count, kit to while awhile the time while I was sweating and wishing for the courage to rip my lower jaw out with a pair of Vice Grips.

Below are some photos of the completed Millennium Falcon Lego model enhanced with special effects that even George Lucas wishes he could employ in the ultimate redux of the Star Wars hexalogy. 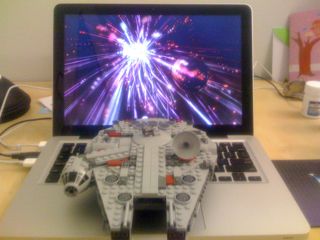 I really like the midi-size Millennium Falcon Lego model, because it’s size allows you to easily fit it on your desk or fly it around the house (i.e., hold it in your hand and pretend to be flying it through asteroids while evading Imperial TIE Fighters). I believe that the time-to-build and the after-completion-fun of the midi-size model is more fulfilling than the much smaller mini-size model (4488) from years past. Additionally, the ease of carrying around the midi-size and its price make it a terrific alternative to the larger and more costly mini-fig scale models (4504, 7190, and 10179). Don’t get me wrong, I would love to own any of the mini-fig scale models including the uber-awesome Ultimate Collector Series Falcon (see below–me salivating at the Lego Store in Atlanta, Georgia).

A long time ago in a galaxy far, far away I used to own the first mini-fig scale Falcon (4504), but I sold it along with my entire first run Star Wars Lego collection (see below). I would like to rebuild my Star Wars Lego collection if the opportunity and capital come my way, but as it is now, I will indulge my Lego fun with the midi-size Millennium Falcon and the Twlight from The Clone Wars series. 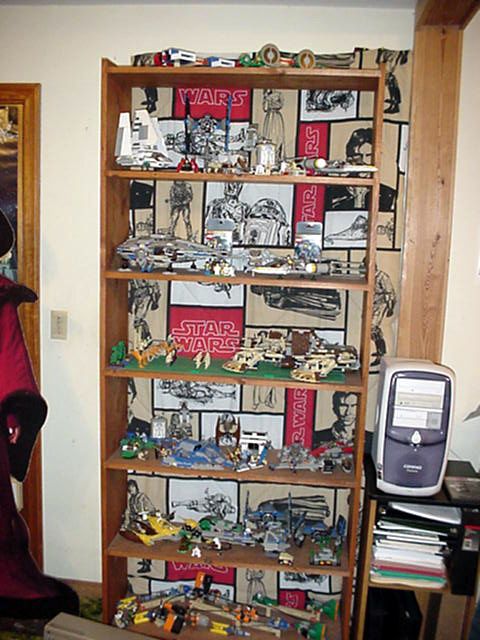