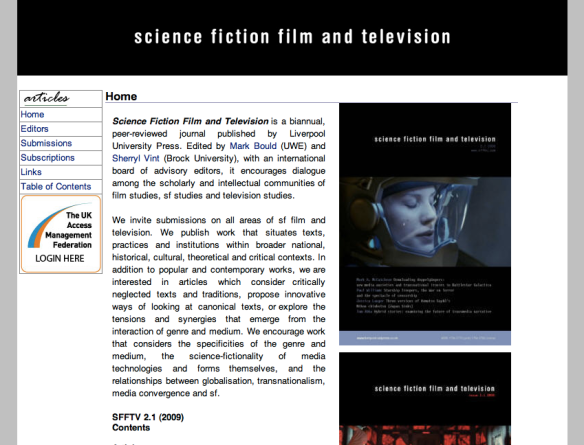 Sherryl Vint sent out the following CFP for the journal Science Fiction Film and Television. I have a BSG essay that I’m definitely going to send to SFFTV. You should send them something, too!

Science Fiction Film and Television is a biannual, peer-reviewed journal published by Liverpool University Press. Edited by Mark Bould (UWE) and Sherryl Vint (Brock University), with an international board of advisory editors, it encourages dialogue among the scholarly and intellectual communities of film studies, sf studies and television studies.

We invite submissions on all areas of sf film and television. We publish articles, book and DVD reviews and review essays, as well as archive entries on theorists (which introduce the work of key and emergent figures in sf studies, television or film studies) and texts (which describe and analyse little-known or unduly neglected films or television series).

We invite submissions in particular for two special issues:

REMAKES, REVISIONS, REBOOTS: Why is the 21st century fascinated by returning to previous sf franchises? Is this nostalgia? Archive fever? Retrofuturism? What economic and cultural forces inform this recent fascination with return and renewal?

BIOPOLITICS: How do biopolitial theories of theorists such as Foucault, Hardt and Negri, Esposito and Agamben inform readings of sf? What can sf contribute to ongoing discussions of biopolitial governance? What can sf visions of posthumanism tell us about life under biopolitical capitalism?

Submissions should be made via our website at http://mc.manuscriptcentral.com/lup-sfftv. If you have an idea for a contribution to the archives section, please contact the editors to discuss your proposal.