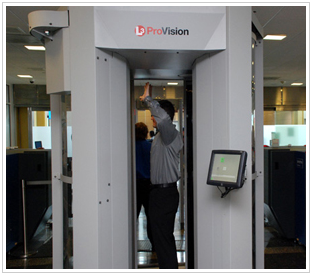 Considerations of personal dignity and privacy aside, there is a distinct possibility that the TSA’s latest scanning gadgetry could be dangerous to persons who are scanned, particularly those with a genetic predisposition for breast cancer, children, and men and women who want to have children in the future. Jason Bell, a molecular biology and biophysicist PhD candidate, critiques the TSA’s latest Advanced Imaging Technology that utilizes x-rays to see under air passengers’ clothing in this blog post. Besides the relative power of the AIT and the way our bodies absorb the particular power level of x-rays that is produces, I am especially worried about the fact that the AIT has the physical ability to produce a broader range of x-rays and that there are no hardware safeties to prevent software malfunctions from dosing you with a greater amount or longer duration of x-rays.

We have heard about this problem before in the tragic case of the Therac 25 radiation machine. A lack of hardware safety measures and bad software UI/underlying coding led to the deaths of cancer patients who had hoped those machines would save their lives. The machines gave them lethal doses of radiation which maimed or killed the patients, because the software was not designed to detect an unsafe condition that would allow an unfiltered high energy beam to strike patients. Instead of having a hardware safety, the Therac 25 manufacturer relied on unverified software to protect patients. Unfortunately for those hurt and killed, their mismanagement of a life-critical biomedical device didn’t work out so well.

The TSA’s AIT shouldn’t be able to kill you in the same way that the Therac 25 could have, but my concern is the silent, long term threat posed by the AIT. According to Bell, you could receive a more dangerous dose or a longer duration dose on your body–particularly on the soft spots such as reproductive organs, breasts, or lymph nodes–that could trigger disease that otherwise wouldn’t have been triggered or triggered earlier than it would have otherwise. He found that:

With that being said, because the scanners have both a radiation source AND a detector in the front AND back of the person in the scanner, it is actually possible for the hardware to conduct a classic, through-the-body X-ray. The TSA claims that the machines are not currently being used in that way; however,based on the limited engineering schematics released in the safety documents, they could be certainly be easily reconfigured to do so by altering the aluminum-plate (or equivalent) filter or by changing the software. So the hardware has the capabilityto output quite high doses of radiation, however a biological dose is a function of the time of exposure as well as the proximity to the source and the power of the power of the source. (Bell par. 5)

The problem is that the TSA has allowed limited review of the devices, and even those devices that were tested were not all operated as they are in airports. Furthermore, we don’t know who was doing the testing. It sounds too much like the government goons’ answer to Indiana Jones’ question about who was studying the Arc of the Covenant: “Top Men.” Unfortunately, those Top Men (or Women) may not have the expertise, education, or training to evaluate the full safety of the scanners for all passengers in all operating circumstances (software malfunctions, power fluctuations, time in use, lifetime of operation, etc.).

Since the recent rise in concern about the x-ray scanners and the new invasive pat downs by the TSA [watch John Tyner’s ‘don’t touch my junk’ video here, read more about him here], the Transportation Safety Administration has added these paragraphs on “Passenger Acceptance” to their AIT site:

Since imaging technology has been deployed at airports, over 99 percent of passengers choose to be screened by this technology over alternative screening procedures. According to a new CBS poll,

4 out of 5 Americans support [how many are air travelers?] the use of advanced imaging technology at airports nationwide. Click here to see more independent polling on AIT acceptance. (cbsnews.com)

Additionally, passengers with joint replacements or other medical devices that would regularly alarm a metal detector often prefer this technology because it is quicker and less invasive than a pat down.

I think I will prefer slow and invasive pat down over the possibility of biomedical malfeasance by the TSA and the manufacturers of the AIT. A simple solution would be for the TSA to have publicly available testing conducted.

If Y and I are called to go through the AIT, we will unfortunately opt for the TSA to touch our respective junk. I wish that I could accept the TSA’s claims that the AIT is safe, but Bell’s analysis of publicly available information is a compelling warning against walking into those scanners if you are concerned about your health. However, I hope that there isn’t any problem with these devices and that all of those people going through the scanners do not have their health adversely affected by the AIT.

Read more about the usefulness and purpose of airport security here on Bruce Schneier’s blog.

I am an Assistant Professor of English at the New York City College of Technology, CUNY whose teaching includes composition and technical communication, and research focuses on science fiction, neuroscience, and digital technology. Also, I coordinate the City Tech Science Fiction Collection, which holds more than 600 linear feet of magazines, anthologies, novels, and research publications. View more posts