Today, the world responded en masse to remember Steve Jobs. My own sadness was lifted on seeing and hearing the many wonderful things that people said and did in memory of Jobs.

Of the Internet-based memorials, I was happy to see BoingBoing’s System 7-like theme for their WordPress-based blog: 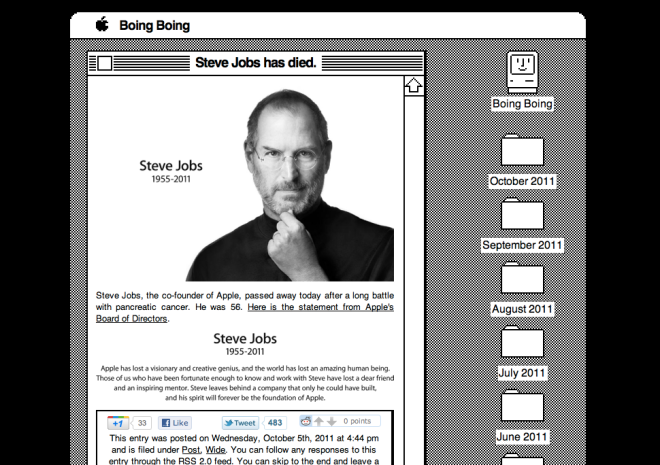 And the one that I consider the most touching was Richard Steven’s “Goodbye” on his retro webcomic Diesel Sweeties [permanent link here]:

I made a screenshot of the page, because the permanent page omits his nice remarks: “RIP Steve. Thanks for the future.” For all of the science fiction that I have read, I believe that Stevens is right that Jobs’ tenacious and innovative push for computer technology brought us kicking and screaming into a bright, shiny, and, dare I say it, human future. His idea was a computer for the rest of us, but its roots, even before he returned to the company in the  1990s, were still firmly in the hacker and trickster past of his own shenanigans with the inimitable Steven Wozniak.

I’m still thinking about what to say here on dynamicsubspace.net about Jobs’ passing. Y and I have talked a lot about it last night and today, because we both respected him a lot. Much of who I am now was modeled on Jobs’ inspiration and his insanely great computers and personal digital technologies. I will write more on this later.