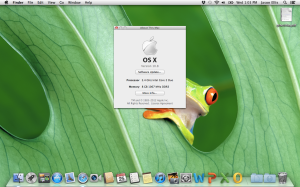 I installed “OS X” 10.8 Mountain Lion this morning after it appeared in the Mac App Store. However, I did create a bootable USB installer for future use when I want to perform a nuke-and-pave installation of Apple’s latest operating system.

So far, OS X Mountain Lion is running lean and fast. As with most updates from Apple, things appear snappier and smoother. Is this a trick of the brain reinforced by hyped expectations and new visual cues built into the operating system’s user interface? I’m not altogether sure, but I am sure that it feels right on the Intel 120GB 330 series SSD that I found at MicroCenter for $89.99 this past weekend.

I am specifically thinking about the new unified search and address bar in Safari 6.0, which shipped with OS X Mountain Lion. This is a feature previously made popular by Google Chrome. In Safari, the functionality seems to be the same as in Chrome, but the visual impact of the new progress bar–the way in which is snaps a little and then a lot–zippity zap–warp speed engaged–hyperdrive go–makes me feel that web pages load faster. While I will leave it to others to time page loads in the new Safari, I will say that the visual cues Apple built into their new version of Safari are quite effective at conveying an idea about Safari’s speed on my late-2008 Aluminum MacBook.

I have yet to play with the dictation features built into the new OS, but I do like the notifications center added to the menu bar, just to the right of the Spotlight icon. I am using iCal more to keep track of upcoming deadlines and events, so I am very happy about this seemingly simple new feature.

So far, I have only hit one snag with OS X Mountain Lion: Gatekeeper. In the latest iteration of OS X, Apple introduced a new security feature to authenticate certain applications as being made and distributed by who they claim to be made and distributed by. This is easy for Mac App Store programs, and I suppose Apple has released a method for non-App Store program developers to sign their software, too. Over the weekend, I had installed my new SSD and reinstalled OS X Lion in preparation for Mountain Lion’s release today. I had not gotten around to reinstalling all my software, so after installing Mountain Lion today, I downloaded and ran the DropBox application. Unfortunately, I was hit with a message that OS X could not verify the DropBox application. I then had to go into System Preferences > Security & Privacy > General > Allow applications downloaded from: change radio button from “Mac App Store and identified developers” to “Anywhere.” Now, DropBox runs. I am glad that Apple is taking security more seriously and implementing new barriers to malware on OS X, but I believe that their lack of explaining how to allow non-signed software to run might be a high barrier to novice Mac users. Perhaps this is the point, but I believe that they should work harder at educating those novice users so that they can become savvy users.

I will report on my OS X Mountain Lion experiences in the future. For now, I can recommend it for supported systems. I believe its $19.99 price to be very fair.

What are your Mountain Lion experiences? Please share them in the comments below.

2 thoughts on “OS X 10.8 Mountain Lion is a Go! (and Encounter with Gatekeeper)”

What do you think? Cancel reply

This site uses Akismet to reduce spam. Learn how your comment data is processed.