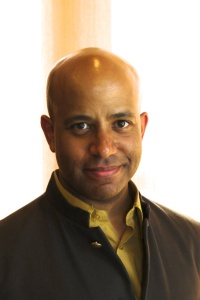 Minister Faust in the Ferst Room.

On Monday, April 1, Minister Faust, the Canadian science fiction writer, delivered a presentation and performed readings from his published fiction to a full audience in Georgia Tech Library’s Ferst Room. His visit to Georgia Tech was part of the School of Literature, Media, and Communication’s Distinguished Speaker Series. There were also three nearby high school classes in attendance through telepresence technology.

Minister Faust began with a presentation titled, “Afrofuturism, E-Town, Imhotep-Hop and Me.” In this presentation, he sketched Canada’s historical, cultural, and political landscape, followed with background on his hometown, Edmonton and the neighborhood that he calls “Kush,” and concluded with an overview of Afrofuturism and his unique approach to storytelling that he calls, “Imhotep-Hop.” 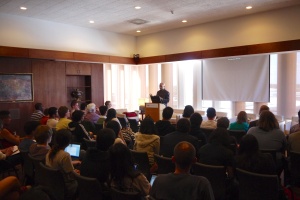 Minister Faust reads to his audience.

Imhotep-Hop builds on the science fiction genealogy of cyberpunk > steampunk > Afrofuturism > steamfunk. Like those inventive subgenres, it is a kind of culture jamming. Like its namesake, it is grounded in intellectualism and the desire for gaining and sharing knowledge. However, Minister Faust recognizes that fiction must be entertaining. He uses allegory and humor to convey interesting and engaging stories about serious matters. Perhaps most importantly, Imhotep-hop indicates the past (ancient African stories and mythologies, presented as allegory) and present (the here-and-now) while pointing toward the future.

Following his presentation, Minister Faust read from two of his novels: The Coyote Kings Book One: Space Age Bachelor Pad and The Alchemists of Kush. 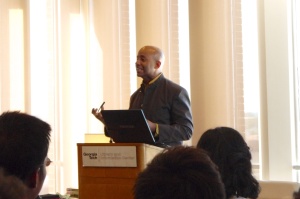 This is the second time that I have had the pleasure and honor of attending a reading by Minister Faust. The first time that I met him was at the 2012 Science Fiction Research Association Conference in Detroit. His reading there, like this one at Georgia Tech, was electric! Instead of simply reading from his novels as a speaker and author, Minister Faust performs his characters. His face, hands, and arms form an orchestra with his talented and powerful voice to convey urgency and surprise, excitement and peace, hostility and love. As he reads a scene to the audience, you are drawn into the story as much if not more so than a Console Cowboy sucked into the other worldly expanse of William Gibson’s cyberspace. Good storytelling, like that performed by Minister Faust, is a far more satisfying virtual reality than any generated in the Crytek or Unreal engines. 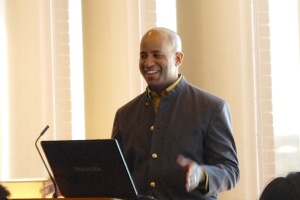 Dr. Lisa Yaszek scheduled Monday’s reading to accommodate one of my ENGL1101 classes. As a former Tech undergraduate, I understand how vitally important it is to students’ personal development and enrichment by attending special events and presentations. Some of my fondest memories of my Tech years include meeting Stephen Wolfram and watching Honda’s Asimo robot in person (twice). Furthermore, one of these meetings–spending the day with science fiction writer Kathleen Ann Goonan changed the direction of my life forever. At the end of that day, I told Dr. Yaszek that I had made up my mind to study science fiction professionally–and I did! 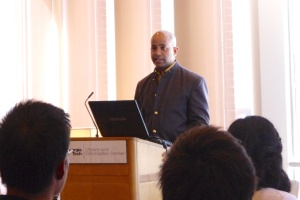 My students from that class and my other two sections were in attendance. Several of my students asked Minister Faust probing and insightful questions about the creative process, the relationship between writing and improving one’s mood, and the influence of his cultural experience on his personal writing style. 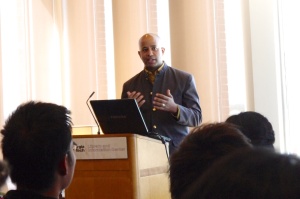 Building on Dr. Laura Otis’s previous Distinguished Speaker Series talk [which I wrote about here], I asked Minister Faust, what kind of conscious thinking does he do as he writes (e.g., verbally, visually, haptically, aurally, etc)? I was very happy to learn that he thinks multimodally depending on the content of a scene or the direction from which he comes when building his stories (verbally first sometimes, visually first at others, or aurally/musically for others). Ultimately, his thinking in different modes is expressed verbally in writing. 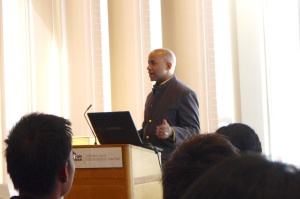 You can download my handwritten notes from his presentation and his responses to audience questions as a PDF here: Minister Faust Notes.

He also gave a second reading on the morning of Tuesday, April 2. Unfortunately, I was unable to attend. However, I am eager to find out which of my students went to that reading! 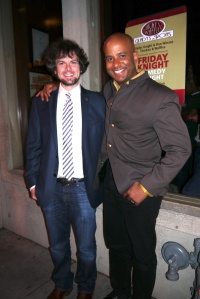 Me and Minister Faust.

I also highly recommend that you watch his TEDxEdmonton talk here and this interview featuring him talking about the fiction of Philip K. Dick in three parts here, here, and here .

Minister Faust is doing very important work through his writing. It is entertaining and educational; It is lighthearted and serious. I believe that it will be read and remembered in the SF pantheon. I am happy and thankful that he shared some of that work with the Georgia Tech community.