I replied to a listing on Craigslist in the Akron/Canton area for a garage floor covered in Legos. On the day before my last PhD exam on Philip K. Dick, I drove down to North Canton to take a look Rick’s collection.

Rick told me that he was getting out of the Lego selling business, so he wanted to unload what he had left. It was cool talking with him about his experiences as a seller, and I was happy to find out that he knows another Lego collector in the area named Jack, who I have met on two other occasions.

After talking for awhile, we completed the deal and loaded everything up. There are various bricks, plates, and pieces from Star Wars, Arctic, Harry Potter, Castle, City, Technic, and many other themes. There were some Megabloks that I hope to sell on Craigslist. My plans for all of the Lego bricks are to sort and rebuild some of the sets that I know there are parts for including the original AT-ST and Boba Fett’s Slave I. Other pieces will go into the remote control robot that I am building now. A few others I will keep, but I will try to find new homes for everything else. It may not seem like I am trying to deal with household clutter by the looks of the following pictures, but it is a process that will ultimately lead to some things that I will enjoy working with in a cleaner environment. In fact, as I am writing this, my floor is actually clean enough that Yufang ran the Dyson around this afternoon. 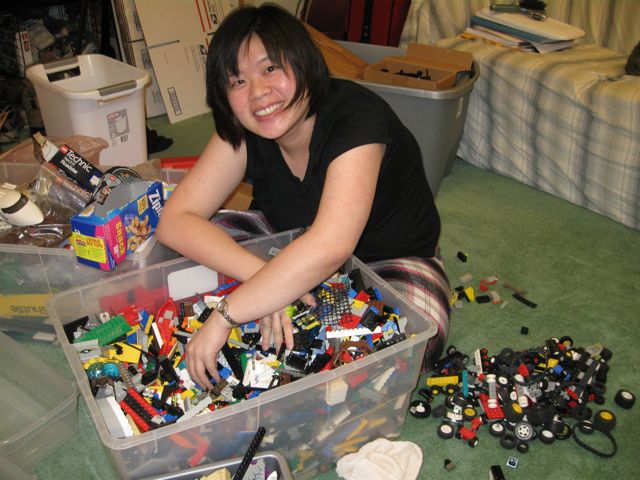 Above: Yufang is helping me sort pieces prior to washing. I use bra containers to hold Legos and I wash them in the washing machine on a light cycle with the drum half full of water and then I dry them on the drying rack supported by screen netting with a floor fan running over them. 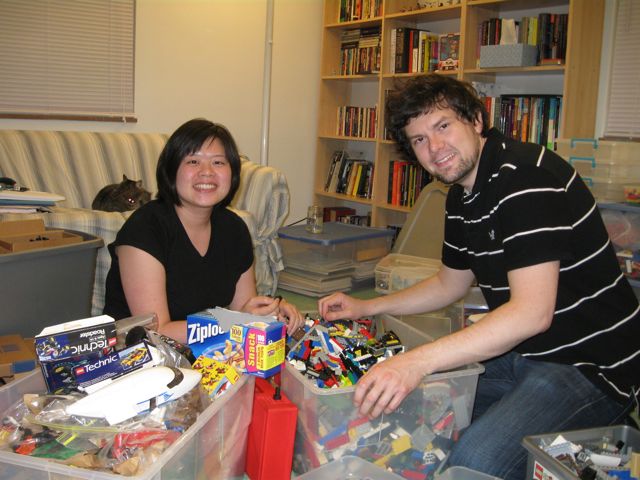 Above: Yufang and I sorting in the middle of my office floor. Miao Miao is sleeping in the background behind Yufang’s shoulder.

Thanks for reading all of this week’s Lego posts. Expect more posts in the future, but now I can say I am finally caught up with these posts!