Europa Report panel: from left to right: Marcus, Gil, Sidney, and me.

After the screening of Europa Report on March 28, 2014 at Kennesaw State University as part of the Atlanta Science Festival, Gil Weinberg moderated a great discussion between the panel (Sidney Perkowitz, Marcus Davis, and me) and the audience of ~25 people. The audience had great questions, comments, and observations. My fellow panel members brought an exciting range of knowledge to the discussion that taught me a lot in a very short time.

Much of the conversation focused on the authenticity of the film, its relationship to the authenticity of other SF films, and what a film like this teaches (right or wrong) its audience. I was very happy to have had some things to say about SF’s didacticism going all the way back to Hugo Gernsback and his “scientifiction.”

My cousin Ryan Cox accompanied me to the screening and took these pictures of the event. 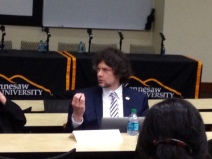 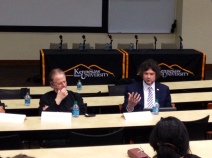 On Friday, March 28, 2014 from 5:00PM to 8:00PM at the Atlanta Science Festival, I will join moderator Gil Weinberg (Georgia Tech, Physics), Marcus Davis (KSU, Biology), Paul Jenkins (Boom Studios), Sidney Perkowitz (Emory, Physics), and Balogun Ojetade (author) to discuss the scientific and cultural significances of the 2013 film Europa Report, which will be screened prior to the panel. The event is free and open to the public. It will be held at Kennesaw State University’s 230-seat Prillaman Hall Auditorium (building #41 – Owl Road, 1000 Chastain Rd NW, Kennesaw, GA 30144). More information is available at (http://atlantasciencefestival.org/events/event/602).