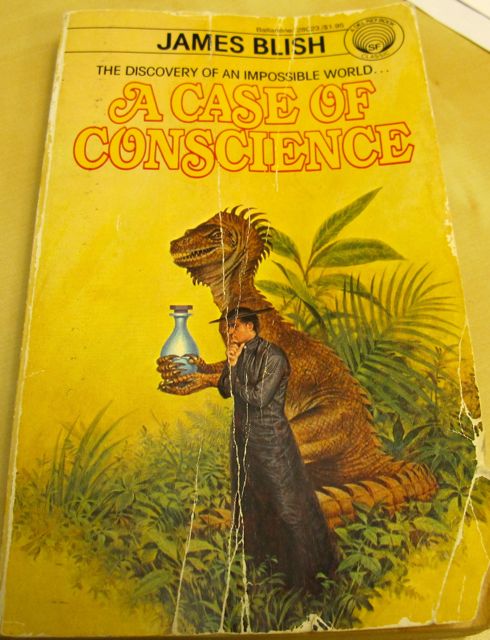 After a wonderful dinner at Mack and Sue Hassler’s house with my wife Yufang and our new friend Carter Kaplan, Mack lent me a copy of James Blish’s A Case of Conscience (1958). Mack knew that I had already presented a paper on James Cameron’s Avatar, and that I would present a revised version of that essay at the upcoming SFRA 2010 Conference in Carefree, AZ next week. He told me that Blish’s novel was related to Avatar either as inspiration or merely part of the cultural discursive currents that made Avatar possible today.

A Case of Conscience is about a group of four Earth men on the distant planet of Lithia. They are each scientists in various fields who are studying the planet to make a recommendation to the UN whether Lithia should be made a safe port for future travel there by humanity. What drives the novel is the group of people largely absent from the narrative–the native Lithians. The adult Lithians, who stand 12′ tall in reptilian bodies and have a highly developed culture, cater to their four Earth guests who carry on their deliberations without any input from the Lithians themselves. It is only the innocuous gift of Chtexa to Father Ramon Ruiz-Sanchez, the Jesuit biologist and narrator of the novel, of his not yet ‘born’ child Egtverchi that the Lithians are given a voice of sorts that is still unheard by the humans who play host. Ultimately, the humans are arrogant towards the Lithians and their culture. They cut down their “Message Tree” which enables their global network of navigation and communication, and through their experiments they destroy the entire planet after Egtverchi’s return. Most importantly, Ruiz, who submits the heretical belief aligned with Philip K. Dick’s cosmogony that the adversary or demiurge has creative abilities and that the seemingly perfect Lithian world and its people are a trap for humanity, cannot see that it is humanity that is at fault for their blindness to the possibilities in a vast cosmos for other points of view and other paradises that are not imbued with human-Christian dogmatic trappings.

Ruiz is an interesting character who tries to work out the unique case of conscience of Lithia. He and his other evaluators of Lithia are each blinded by his own cultural and educational restraints. These humans who are on Lithia for some time never get around to studying the Lithians themselves, and it is only at the end that Ruiz learns how the Lithians procreate and develop into adults. This realization comes to Ruiz as a hidden danger, and a fact that leads him to think of the Lithians as creations of the Adversary/Satan rather than souled creations of Almighty God. Their perfections, in Ruiz’s worldview and experience, can only be aberrations of the design that he believes was put into effect on Earth. Even at the end, as he is intoning the rites of exorcism, he cannot see that it is human beliefs that has colored what Lithia is and how humans see Lithia.

A Case of Conscience is a superb example of postcolonial science fiction. It starts off with the power of an Asmovian hard science fiction combined with the social. Lithians have a well developed society that the humans, even Ruiz who knows their language, does not actively work to engage. Even this seemingly interested character does not leave his plant specimens long enough to realize that the Lithians are far more interesting and important to any decision arrived at by the visiting human contingent than the other studies these humans are undertaking. Back on Earth, the social constraints of living underground, which comes about from the Cold War and mirroring Dick’s The Penultimate Truth, explodes when Chtexa’s child Egtverchi incites the human outsiders of society to revolt.

Egtverchi is an outsider to human culture, but he is still a product of human culture. The Lithians do carry a certain amount of memories and ingrained abilities in their DNA, but Egtverchi’s acculturation and learning, particularly his developmental years under observation and scientific examination, mold him into a being divorced from his own people who can pass judgement on humanity as excluding certain individuals from the decision making process and full enjoyment of modern life. However, Ruiz, Michelis, and the others cannot see this. They cannot see that Egtverchi is a creation of humanity and it is not his Lithian-ness that makes him capable of inciting unrest on Earth. They cannot see that humanity had passed judgement on Lithia without understanding the Lithians or even caring that the Lithians had a society and culture or that the Lithians have agency and sovereignty. Ruiz and the others, even the Asian female scientist Liu Meid, use their own discursive background to assert authority over Egtverchi and the Lithians.

A Case of Conscience is a powerfully moving novel that should be more widely read, not necessarily for its connection to Avatar, but as another science fiction work that challenges humanity to not be so bullheaded and domineering when it comes to excluded persons or groups. This novel would be a strong text for a postcolonialism course as well as other courses in which hegemony of various colors is challenged, critiqued, and questioned. It is a hard science fiction novel, which means that Blish does spend some time explaining his science. Nevertheless, his character development of Ruiz in particular carries the novel. Ruiz is depicted as a likable person who wants to do right, but he cannot see right outside of his situation as a Jesuit scientist. He requires his beliefs in Christianity to provide a basis for his logic. As such, his logic is human and male centric. The Lithians lose their appealing interest to him when he fits them into his domineering logic of Christian belief. For him, that belief cannot change, even allowing for his heresies, so the Lithians must be made to serve a particular preselected role within his belief system. I hope that you will read this novel, and in doing so, find yourself disheartened with human chauvinism. You may also find some relevant threads connecting the novel to America’s current conquests in Iraq and Afghanistan.

And a final question: How many science fictions have Jesuit or religious order protagonists? I’m thinking of Miller’s A Canticle for Leibowitz, Stephenson’s Anathem, and MacDonald’s Brazyl.