This is the ninth post in a series that I call, “Recovered Writing.” I am going through my personal archive of undergraduate and graduate school writing, recovering those essays I consider interesting but that I am unlikely to revise for traditional publication, and posting those essays as-is on my blog in the hope of engaging others with these ideas that played a formative role in my development as a scholar and teacher. Because this and the other essays in the Recovered Writing series are posted as-is and edited only for web-readability, I hope that readers will accept them for what they are–undergraduate and graduate school essays conveying varying degrees of argumentation, rigor, idea development, and research. Furthermore, I dislike the idea of these essays languishing in a digital tomb, so I offer them here to excite your curiosity and encourage your conversation.

My “Sunset Observation Project” was a semester-long project in Professor James Sowell’s PHYS 2021 class in Fall 2004. Originally, I tried taking this class from Professor Sowell when I was having a lot of trouble  in school in the late 1990s. So, when I returned to Georgia Tech after a stint in the business world, I made a point to complete Professor Sowell’s class. I wanted to prove to myself that I could succeed in this class, and I wanted to prove to Professor Sowell, who I considered an engaging and interested instructor, that I could succeed in his class. Ultimately, I did well in this class and the second Astronomy class on large-scale astronomy that Professor Sowell also taught.

This project helped me begin getting back into shape, because I choose to do it the hard way: instead of observing the sunset from campus, I went to the best observation place outside the city on top of Stone Mountain. This meant that I had to hike up to the top with my tripod and camera on a regular basis.

I used Adobe Photoshop to create a line-drawn skyline and to measure my observations consistently by using layers.

While I am posting my Sunset Observation Project as-is (meaning all of the mistakes contained below are mine), I continue to tell my students today that Professor Sowell was one of the professors who helped me with my writing, because I read his comments and listened to his advice. The takeaway for my students is that we can improve on our writing, communication, and composition anywhere and anytime–even in a class about our great solar system.

The Sunset Observation Project is designed to use long established techniques to chart the progression of the Sun across the horizon over the course of one school semester. It allows the student to become more aware of the motion of the Earth, both on its axis as well as its orbit around the Sun.

Over the course of the semester each student will make a number of observations of the Sun setting.  Each observation must be made from the same location and a point of reference should be chosen along the horizon so that the Sun’s change in location can be measured using the hand and fingers as angular measuring devices.  Each observation should be about a week or more apart so that a discernible change can be observed.

I made my observations from the same spot west of downtown Atlanta on top of Stone Mountain.  I expect smog and weather to cause some problems with observing sunsets, but Stone Mountain provides an excellent view of the horizon due to its height and distance away from tall buildings. 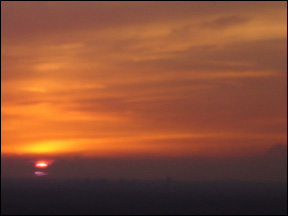 This was my first solar observation of the semester.  It was also the first time that I had climbed Stone Mountain.  I learned a lot on this first trip about giving myself enough time to hike the 1.4 miles to the top as well as bringing some Gatorade along because the outside water fountain wasn’t working.

The cloud cover and haze was a problem that I encountered all semester.  It was difficult to arrange times to hike to the top of Stone Mountain that took into account my school schedule, work schedule, and the weather.  If I had considered these logistical problems beforehand, I would have chosen to make my observations from a window in one of Tech’s buildings.

This was a good day to hike to the top of Stone Mountain.  Unfortunately, there were distant clouds which obscured the setting of the sun so I had to take my picture while the sun was still above the building tops.

The sun moved approximately 5 degrees South of the building that I used for a reference point during the semester of observations. 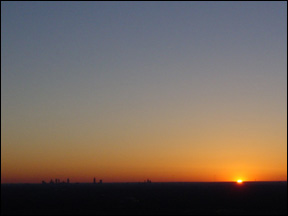 There was only a slight haze in the distance when I made this observation.  By this time, I had begun to enjoy hiking to the top of Stone Mountain.  I brought a friend along on the first observation, but no one would join me for any of other observations.

The Sun is approximately 10 degrees South of my first observation.

The Sun had moved a great deal since my last observation.  Weather (i.e., hurricanes) and a busy schedule makes these observations difficult to make because of the time involved going to Stone Mountain and hiking to the top.

The Sun is about 26 degrees South of my first observation. 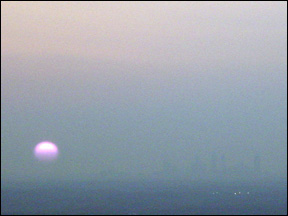 This is the last observation that I made for this project.  It was a hazy evening which made it difficult to get a good picture of the setting Sun.

The Sun is now 30 degrees South of where I began observing it in August.  It has moved across the horizon of a good deal of metro Atlanta.

The Sun was observed to move in a southwardly direction.  From a top-down view, it would appear to be moving in a counterclockwise motion along the horizon.  The rate of change seemed to be larger at the beginning of the semester.  The first three observations covered equal times, but the amount of change increased from the 8/30-9/9 period to the 9/9-9/18 period.  This pattern changed for the last two observations, which covered a greater time between the two observations (16 days), but there was only a 4 degree change in the position of the Sun.  This is probably due to the Sun’s arc across the sky decreasing as the year progresses.  The Sun is lower in the sky so it does not have as far to travel across the sky later in the year.

The Sun should rise about 180 degrees from where it sets if it strictly rose in the East and set in the West.  The Sun does not do this because the inclination of the Earth causes the Sun to appear to be low or high in the sky during the course of the year.  This generates our seasons because the angle of light hitting the Earth’s surface changes as the Earth makes its way around the Sun during the year.  The length of the day gets shorter as the year progresses because the Sun cuts a smaller arc in the sky.  Less distance without any drastic changes in speed means that the Sun doesn’t spend as much time in the sky each day as the year progresses.

Noon is still the time at which the Sun is at its highest point in the sky, but this highest point changes during the course of the semester.  This point will get lower and lower until the Winter Solstice when the Sun will begin to move North again and its path across the sky will likewise get higher too.

Before this project, I had never been to the top of Stone Mountain.  Now I have been up to the top many times!  Observing the Moon and the Sun during the semester has made me more aware of the motions and orientations of the Moon, Earth, and Sun.  Before I had a vague awareness of how these things moved and were orientated, but now I have a much better grasp of the subject.

Some problems that I encountered had to do with the weather.  The barrage of hurricanes in late September and October caused a lot of bad weather here in Atlanta.  In addition, it is difficult to arrange times to hike to the top of Stone Mountain when you have school and work schedules to deal with.  I am pleased with the outcome of my Sunset Observation Project, but I wish that I had been able to make more observations.  Because of this project, I will continue hiking to the top of Stone Mountain to watch the sunset.