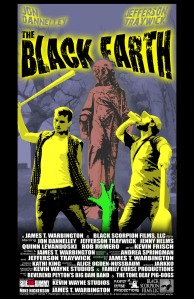 James Warbington, writer and director of the short film The Black Earth, a movie about Johnny and Hank Ellis’ troubles with brain-eating zombies and an empty cooler, tells me that things are on track with the feature film version [read my extensive coverage of the film and an interview with James by clicking here].
He has some great music lined up for the feature film’s soundtrack, but he needs your help to pick the Real McKenzies tune from their new album that goes into the movie. Read James’ email below to find out how to vote:

Hey it’s me James from the Black Earth Feature Film/Short FIlm.
As we are chugging along getting ready to film the feature length The Black Earth- We want you to have some input-
We are asking everyone to vote for music- (this one is more legit than the Mojo Song, like record label knows about this one and is helping out)
The Real McKenzies are a Canadian Scottish Punk Band from Vancouver- Pretty well known, I’ve been listening to ’em for nearly 10 years or more.
Their New Album on Fat Wreckchords/Epitaph/Sony/Union Label Group
“Westwinds”
comes out on March 27th-
We get to choose one song from the album, and we’ve decided to leave it up to all the public, and since you folks are the people that have helped us get this far your opinion matters! Casue we loves you!
So go to…
www.theblackearthmovie.com
There you can click on links to the Band’s Label and the Mp3 Samples on Amazon
click the links hear samples, but trust me wait to vote until you can hear the full songs on March 26th, either through Amazon, or Donwload them, or buy the CD, because the Short Snippets they play on Amazon don’t do the songs justice (Like for Example “The Tempest” sounds really slow in the sample, but the song kicks in extremely heavy midway through)
Also more info you can check out the movie blog site that also has info on how to gut a torso-
http://blackearthmovie.tumblr.com/
Once again thank you to all of you who have supported the film and helped us make it this far, I promise you will laugh yer butt off at the movie and if you don’t I will wear a dress and re-enact the flashdance dancing sequence and Carrie. Bucket O’ Blood.
Much Love-
James/Black Earff
P.S. the Intro Song Winner btw is…..”You Can’t Kill Me” Mojo Nixon