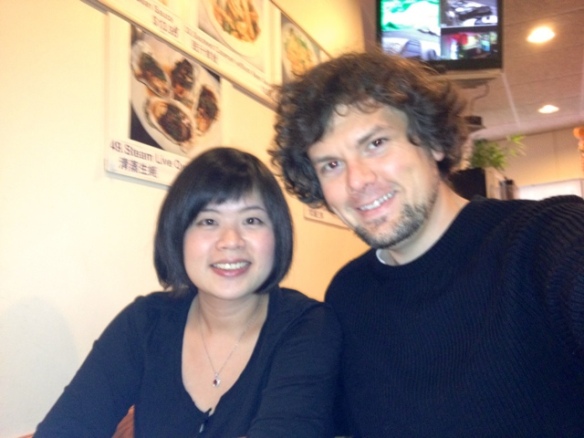 Y and I celebrated our second wedding anniversary today! 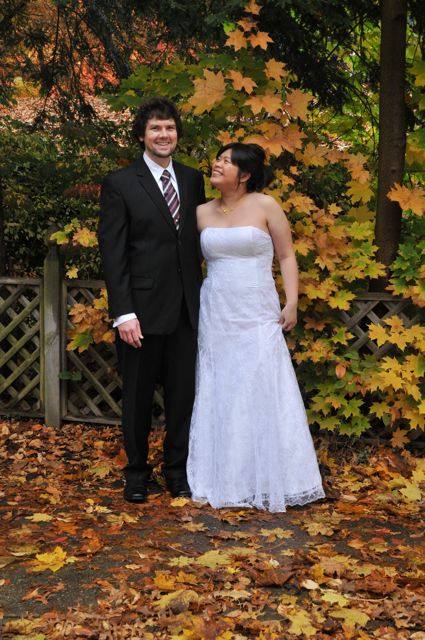 Yufang and I got married on 30 October 2009 at a small ceremony officiated by our good friend, the Reverend Seth Johnson. We had a wonderful time with all of our friends from near and far (there were contingencies from Canada, New York City, and Athens, Georgia), and we look forward to seeing our friends all around the world who were unable to make it to the ceremony.

After the wedding, we drove to the Great White North for a short stay at Niagara Falls in a beautiful hotel overlooking the horseshoe falls (it felt like we were going to fall in from our room on the 22nd floor).

Married life isn’t any different than our pre-married life, but it is reassuring to know that we won’t be parting ways. Oh, and I got a really sweet ring, too!

(The photo above of Yufang and me was taken by the inestimable Dale Richards, a colleague and friend at Kent State).

Yesterday, I picked up my Grandpa Gerald’s wedding ring from Kent Jeweler’s after it was resized. In preparation for wearing a ring all the time, which I am not accustomed to, I am wearing my high school class ring.

Why am I doing this? It’s something that I’ve learned from NASA and their preparation for human space exploration. NASA scientists and engineers realize that humans may react in unexpected or unanticipated ways when presented by unexpected experiences. In order to prepare astronauts for space travel, NASA subject astronauts to the sensations of rocket launches, operating equipment under duress, and atmospheric reentry. These simulations were originally copies without an original. They were extrapolations, approximations. So the first Americans in space already had an idea of what it would be like. Likewise, the first astronauts to visit the Moon, said it was just like what they saw in Stanley Kubrick’s 2001: A Space Odyssey. The real was preceded by the copy, the representation. Thus, NASA, and manned space exploration in general via science fictional representations, are buttressed on the postmodern. Is it possible for someone to experience outer space without the taint of these simulations? I don’t believe that it is necessary for this to happen, but I do contend that we should be aware of these influences on our experience and the way it influences our subjective experience.

Does all of this also mean that our wedding will be postmodern? No. In a mundane way, I am merely acclimating myself to having a ring on my hand, because in the past, wearing a ring distracted me while typing (as it is now, but not to as great an extent as it did when I first began wearing it again).