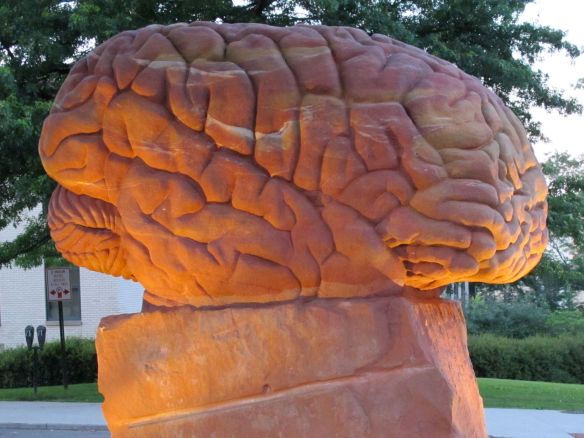 Several conversations with Tammy Clewell on the neuronovel rekindled my interest in the biology of the human brain. As a result, I have decided to do some research on the neuronovel and its relationship to science fiction. The neuronovel, with its emphasis on the hardware of the brain over the software of psychology, is arguably a hard science fiction topic (albeit most lacking an extrapolative element). Additionally, novels traditionally seen in terms of psychological explanation can be re-read with neuroscience in mind (pun intended).

I am building a list of science fiction novels and short stories that specifically addresses the neuronovel’s emphasis of brains over mind. What titles of novels or short stories from approximately 1950 to the present can you recommend that emphasize brains over mind, and the brain’s influence on one’s sense of self and understanding of the world. This would include brain trauma over psychological trauma, neuroscience over psychology, depictions of creating or developing brains and how that shapes one’s engagement with the world, introspection or internal dialog that might have a biological explanation rather than a psychological one, etc. Two sets of works that immediate come to mind are Asimov’s robots (they exhibit psychological problems, but there is an emphasis on those behaviors resulting from the way they are hardwired), and Dick’s VALIS novels (the author’s 2-3-74 events can be more simply diagnosed as the first in a series of unfortunate strokes).

This is a very rough sketch at this point, so please bear with me as a work through it. All suggestions are welcome and much appreciated.