I began this new LEGO MOC (my own creation) project while reading Michael Brooke’s The Concrete Wave: The History of Skateboarding (1999) and after assembling my Mike McGill re-issued skateboard.

Some ideas from skateboarding culture inspired this project. First, there’s the tension between Thrasher’s “Skate and Destroy” and Transworld Skateboarding’s “Skate and Create.” The former appearing in the December 1982 issue and the latter appearing in response in its first issue in May/June 1983. When I first skated, I didn’t know about this difference of ethos, but I can say that I was drawn to reading Transworld Skateboarding more so than Thrasher.  Transworld’s ethos of making something from the act of skateboarding fits well with my own attitude of doing good in the world through teaching and making (as opposed to wrapping the act of destruction into an aggressive skating attitude–understanding, of course, there is a certain amount of hyperbole in this motto and more back story worth investigating–see the interview by Adam Creagan with Craig Stecyk in Thrasher March 2010, pp. 80-81, and Konstatin Butz’s Grinding California, pp. 73).

Second, many skaters talk about riding as an act of self-expression, creativity, and doing. While the act of skating is ephemeral, skaters build analogies between the sport and other creative endeavors such as writing, playing, painting, expression, and language. For example: Rodney Mullen writes, “[Skateboarding] has been the arena where I could stake my claim, the play where I would contribute my verse, and even the pen with which I write” (qtd. in Brookle 11).  Chris Long writes, “‘How glad I am that I skateboard’ . . . finding my own lines and creating my own ways of playing” (qtd. in Brooke 173). Darrel Delgado writes, “Skateboarding in a pool is like being a painter, and every new pool is a blank canvas and you are the artist. Every artist has a different approach and every pool is different, which keeps the intrigue alive. You can go wherever your mind and the transitions will let you go” (qtd. in Brooke 135). Mike Valleley writes about finding skateboarding, “I got an identity and something productive. It was creative, physical activity and I used my entire being to do it” (qtd. in Brooke 137). Tony Alva writes, “Just do something that’s in tune with an individual type of expression. I think that’s what’s so important about skateboarding” (qtd. in Brooke 175). Dave Hackett writes, “Pure and simple, [skateboarding is] a healthy, radical art form. . . . Skateboarding utilizes the every-expanding environment of steel, concrete, plaster, or wood as its canvas. . . . The skater becomes one with his board, while the board in turn translates the language of the terrain” (qtd. in Brooke 176). On these points, I think skateboarding and LEGO building overlap–in both cases, skateboarding and making, the fulfilling goal is creative and imaginative expression through a given medium–the former being the assemblage of body, skateboard, and terrain, and the latter being the assemblage of builder and brick.

I wanted to combine different aspects of skateboarding into a single model. I grew up with street skating, because there weren’t any local skate parks (though, I have discovered in my research that there was a skate park in Brunswick in the late-1970s called Nova Skate Park–more on that in a future post). But, I always wanted to skate vert and pipes, so I thought about combining what I knew with what I wanted to learn.

I got the idea for the ramp’s vert and transition design from LEGO 60200 Capital City set, which has one component that is a combined skateboard ramp/wall climb/basketball court. It uses dark grey inverted arches for the transition, which I agreed was the best choice of brick–albeit in tan color to emulate the color of wood–for the ramp that I had in mind.

The next consideration was how large a model to make. I knew that I would have to purchase the inverted arch bricks for the ramp, so I looked for a seller with a good price and selection of elements that would help me realize the idea crystalizing in my mind. Alphabrix, a seller with great feedback had 20 tan, inverted arch bricks, which would let me build a 10-stud wide ramp. I figured that its length should be at least double its width, if not more. Ultimately, I settled on a 10-stud wide ramp with a 28 stud length including both tables. This allowed two studs on either side of the ramp for stairs if I went with an overall length of 32 studs for the model. Since I opted for a 32 stud length, I figured that a 16 stud width for the overall model would be enough to add a street skating scene in the model’s foreground. 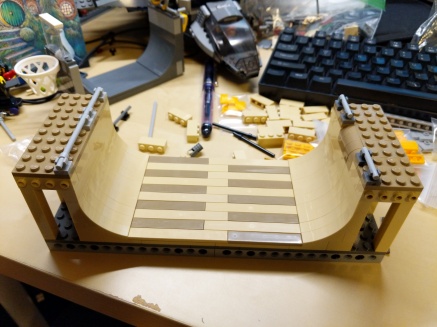 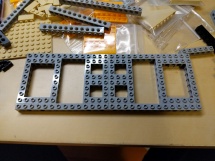 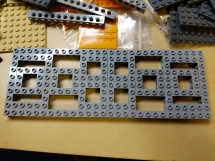 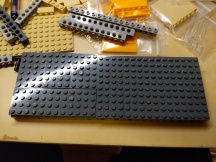 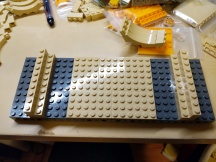 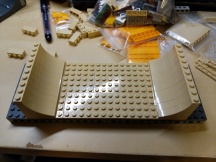 After receiving the Bricklink parts and sorting out some necessary elements from my collection, I built the vert ramp first. Even though this would occupy the rear part of the model, it would dominate the model and be its focus. I wanted to get it right. I thought about how I would build a real one. I wanted a steel foundation that would be elevated off the ground. The ramp and tables would be made out of wood. As a new ramp, I wanted to give it a little bit of style with alternating color–light and dark tan tiles emulating different sheets of plywood. On the right side, I wanted a sloping launch that divided two drops on the front and back–this was a ramp design that I saw many years ago that gave the skaters a divided coping for new trick opportunities. 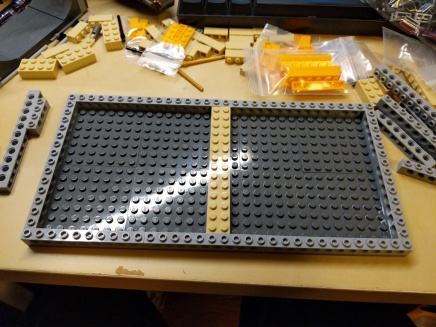 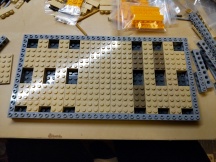 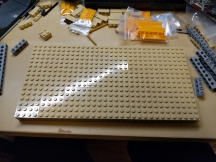 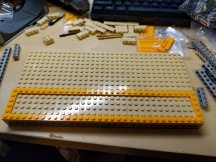 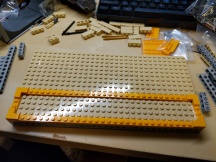 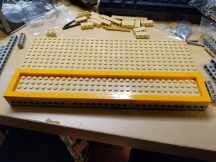 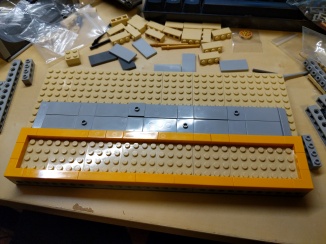 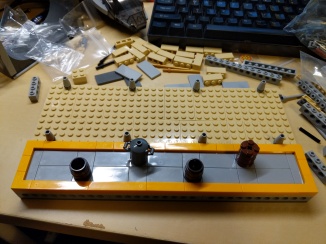 With the vert ramp complete, I turned my attention to the base and its foregrounded street skating area comprising 6 studs by 32 studs. The bottom of the base are dark grey plates supporting a circumference of Technic bricks and filled in with 2 x 4 bricks. I covered the surface mostly with tan 4 x 6 plates. I built up a curb with 1 x 4 and 1 x 6 bright yellow plates covered with the same colored tiles. Within that area, I filled in with a single layer of light grey tiles–some with single studs and the rest without to allow placement of obstacles like barrels and trash cans, which can be skated around or ollied over. Finally, I put concrete cones down to support the ramp behind the street skate area. 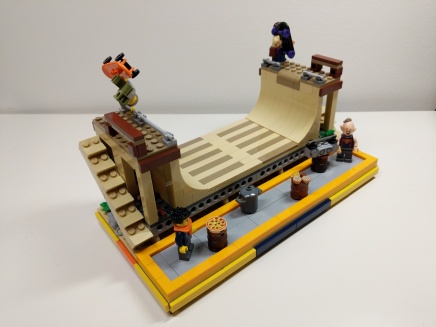 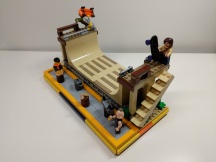 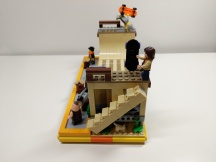 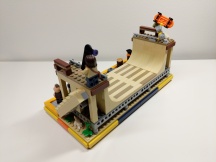 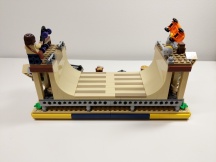 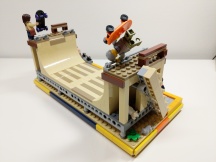 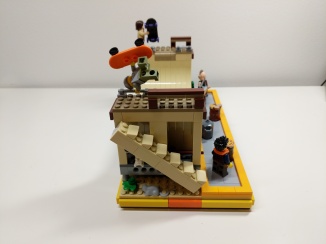 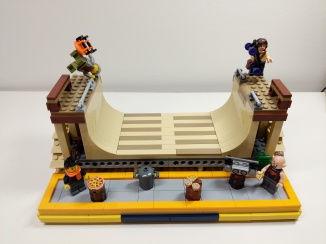 Finally, I combined the vert ramp with the base and its street skate area. I used yellow, dark blue, and orange tiles to skirt the Technic bricks around the base. The vert ramp’s coping permits posing of skaters doing hand plants. In the foreground, I added a stereo (probably playing an eclectic mix of They Might Be Giants, The Beastie Boys, and Technotronic) and snacks including pizza and cookies (shredding fuel).

Usually, it takes me several days to weeks to complete a build like this, which I have chronicled on other blog posts. However, I built this model in a single evening. I think my mind had been working on the project while I waited for the needed bricks to arrive in the mail. Even though I wasn’t haptically manipulating the bricks in my hands, I was daydreaming and imagining how to put the model together at odd times between placing the brick order and receiving them in the mail.

While imagining myself shredding on my completed LEGO skateboarding model and thinking about picking up my McGill deck to hit the streets with, I’m reminded of the Kevin J. Thatcher’s first editorial in the January 1981 issue of Thrasher: “The average individual was never properly exposed to the unlimited possibilities of a platform with four wheels under it–a simple basic mechanical device which serves as an energy-efficient mode of transportation, a basis for a valid sporting activity, and as a vehicle for aggressive expression. . . . Thrashing is finding something and taking it to the ultimate limit–not dwelling on it, but using it to the fullest and moving on. Skateboarding has not yet reached its maximum potential, and who can say what the limits are? To find out–Grab that board!” (6). Grab that board, grab that LEGO brick, grab that camera, grab whatever it is that you can express yourself with, because that is the thing with which you can leave your mark on the world.