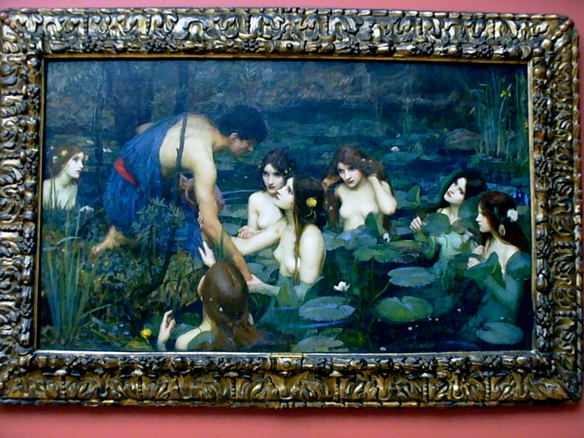 As reported on the Manchester Evening News, BBC, Guardian, and ABC, the Manchester Art Gallery removed John William Waterhouse’s Hylas and the Nymphs with the stated intent that its removal (a supposed artistic act itself) would encourage discussion about how to display such art in the future. Instead, the removal of Waterhouse’s painting seems at best ham-fisted and at worst censorship. While I wholeheartedly agree with artistic criticism and contextualization, the removal of artwork deemed in need of recontextualization is wrongheaded. While Hylas and the Nymphs is well known and available in print and online, the original work itself should remain in place while inviting feedback from its varied audiences and critics. The Manchester Art Gallery’s approach places the work of art in the dark and out of reach for any such debate.

Considering this drastic step by the Manchester Art Gallery, I feel extremely lucky to have seen Waterhouse’s Hylas and the Nymphs on a visit to the gallery in 2006 while I was a graduate student at the University of Liverpool. It was during that visit that I took the photo included above. A higher resolution image of the painting is available on the Wikimedia Commons here.