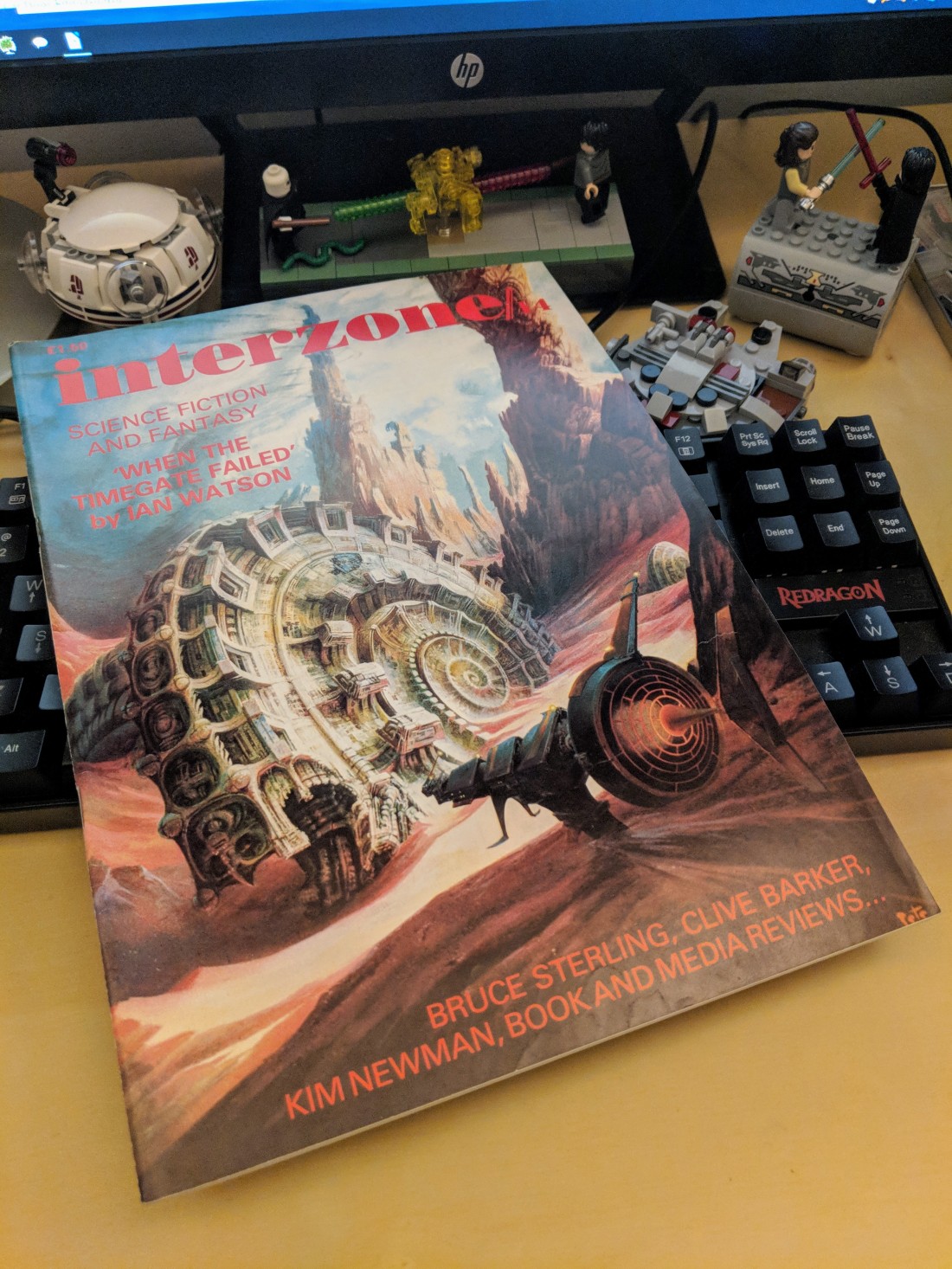 I received another eBay find today: Interzone issue 14 (Winter 1985/1986). This is a special magazine issue for me, because it contains “The New Science Fiction” manifesto by Vincent Omniaveritas (pseudonym for the science fiction writer and activist Bruce Sterling; his alter ego also appears as publisher of the zine Cheap Truth–read scanned issues here or text of each issue here).

Originally published in the Puerto Rican fanzine Warhoon, this hard-hitting call-to-arms advocates that, “We must create the native literature of a post-industrial society” (40).

This isn’t necessarily a manifesto for the movement known as cyberpunk, but many cyberpunk works fit. Instead, it is a larger artistic movement, which he describes thus at the end of the essay:

What, in short, is the New Science Fiction? How do you write it, how do you recognize it?

First, it is not the property of any editor, clique, publisher, or regional or national association. It is not a question of personal influence, creative writing classes, or apprenticeship to genre gurus. It is a question of approach, of technique. And these are its trademarks:

(1) Technological literacy, and a concern with genuine modern science as opposed to the hand-me-down pseudoscience guff of past decades.

(2) Imaginative concentration, in which extrapolations are thoroughly and originally worked out rather than patched together from previous notions.

(4) A global, 21st-century point of view, which is not bound by the assumptions of middle-aged, middle-class white American males.

(5) A fictional technique which takes the advances of the new Wave as already given, using the full range of literary craftsmanship, yet asserting the primacy of content over style and meaning over mannerism.

The New Science Fiction is a process, directed toward a goal. It is an artistic movement in the fullest sense of the word. It is the hard work of dedicated artists, who know their work is worthwhile, who treat it as such, and who push themselves to the limit in pursuit of excellent.

And it is for real. (Omniaveritas 40)

The entire manifesto is worth reading–for its historical significance, its ideas for the New Science Fiction, and its prize-fighter-like style of sending its message home blow-after-blow. You can find a copy on Archive.org’s Internet Wayback Machine here.