I took over 1,900 pictures while Y and I were in Brunswick, Georgia and Taiwan over the holidays. I am beginning to go through them now using Apple’s Aperture software, which I purchased and downloaded through Apple’s new App Store for MacOS X, and I hope to post the best of the lot to Flickr soon. 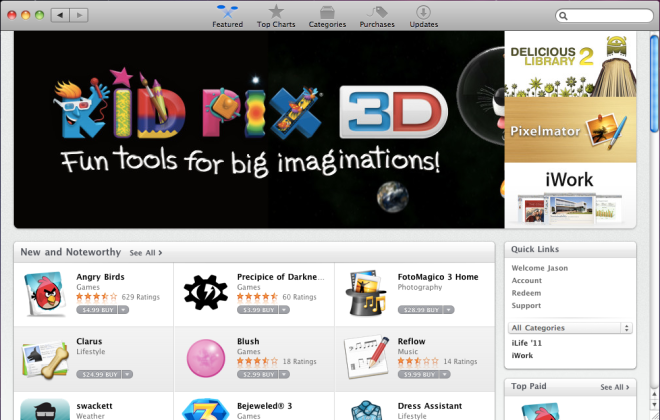 The App Store (pictured above) for the desktop computing environment was the next logical step for Apple’s consolidation of digital delivery of programs and consumable media. The App Store delivers free and paid applications to a user’s desktop through its iTunes Store-like interface. Additionally, it automatically updates your purchased and installed programs. You can also install purchased apps on other computers that you own in your household by logging into the App Store app and re-downloading them for no additional charge.

As cool as I think the App Store is, it is distinguished by the absence of many apps by Microsoft and other big name publishers. I realize that they have only now launched the service, but I don’t know how many developers will want to sign on.

If you don’t have the App Store, you can get automatically after you upgrade to MacOS X 10.6.6. You can see the App Store icon in the Dock on the lower left corner of this image of my Desktop: